A massive blaze has engulfed a block of flats in west London leaving at least six people dead.

Met Police have said they expect the number of fatalities to rise.

A total of 74 people have been treated in hospital and 20 are in critical care London Ambulance service have confirmed.

Ten people made their own way to hospital after escaping the blaze.

More than 200 firefighters were sent to tackle the fire at the 24-storey Grenfell Tower which was reported just after 1.15am on Wednesday.

According to the BBC a “significant number of people” are unaccounted for. 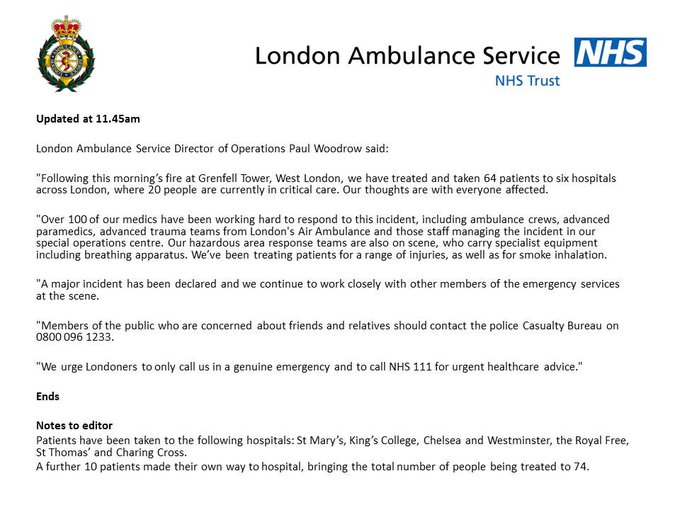 Prime Minister Theresa May is “deeply saddened by the tragic loss of life” in the Grenfell Tower fire, Downing Street said.

A government meeting about the fire is set to take place at 3pm.

It is believed that the fire began on the second floor but she said the cause is not yet known.

Fire commissioner Dany Cotton said the fire was ‘unprecedented’ and said crews have been working tirelessly at the scene.

Cotton also said crews had only reached as far as the 19th and 20th floors of the building so far.

Pictures from the scene in north Kensington showed flames engulfing the block and the plume of smoke visible across the capital, as 50 people have been taken to five hospitals.

Local residents have raised unconfirmed concerns about fire safety issues they say existed at the apartment block, however a full forensic investigation will need to be carried out to determine the cause of the fire.

Leader of the Kensignton and Chelsea council, Nick Paget-Brown, told the BBC there would need to be “a thorough investigation into the cause of the fire and why it spread so rapidly”.

Mr Paget-Brown said there were always “concerns” about fire safety in tower blocks, but insisted council buildings in the area “were regularly inspected”.

London Mayor Sadiq Khan said questions will need to be answered over the safety of tower blocks.

Some residents said they had been advised they should stay in their flats in the event of a fire, while the block’s residents association had previously warned it was worried about the risk of a serious fire.

“These questions are really important questions that need to be answered,” Khan told BBC Radio.

“Across London we have many, many tower blocks and what we can’t have is a situation where people’s safety is put at risk because of bad advice being given or if it is the case, as has been alleged, of tower blocks not being properly serviced or maintained.”

Initial fears emerged that the building would collapse. Debris continues to fall in the area but London Fire Brigade commissioner has said a structural engineer is monitoring the building and it appears safe for now.

A number of terrifying eye-witness accounts emerged as the true horror of the blaze unfolded in the English capital.

Residents were left trapped on the upper floors of the building as the fire ripped through the building.

Parents were seen throwing their children from the apartment block according to witness accounts.

One woman revealed that a member of the public managed to save a baby when it was dropped from the ninth or 10th floor.

Another woman, identified only as Tamara, told BBC breakfast that she could hear people screaming “save my children”.

“There were people throwing their kids out [of windows], they were shouting ‘save my children’,” she said.

As crews continue to battle the fire anxious residents are searching for missing loved ones.

The Metropolitan Police have set up a casualty bureau for anyone concerned about their friends and family on 0800 0961 233.

“My brother has friends and they live in there,” he said. “I’m not sure if they are all right yet.”

Parents from nearby Kensington Aldridge Academy, where Omar attends, had been told the school was closed, his father said.

Meanwhile, Zeinab Jafari who lives nearby said some of her family live on the eleventh floor and, while her mother and sister-in-law escaped Zeinab told the BBC she has not heard from her father in law since

Paul Littlejohn, who lives opposite Grenfell Tower, also told the BBC of the terrifying scenes he witnessed in the early hours as residents tried to escape the inferno.

“I woke up about half past one this morning to look across the road and see the big Grenfell Tower, in a towering inferno, blaze, just fire coming out of every window, windows smashing and exploding,” he said.

“Things falling out, people screaming, people jumping out on fire, chucking ropes down what they’d made out of bedsheets, to try and climb out. Just complete nightmare, absolute nightmare.”

Actor and writer Tim Downie, who lives around 600 metres from the scene in Latimer Road, was among those who feared the block could collapse.

He told Press Association: “It’s horrendous. The whole building is engulfed in flames. It’s gone. It’s just a matter of time before this building collapses.

“It’s the most terrifying thing I’ve ever seen. I just hope they have got everyone out.

“The first I knew was the noise of sirens, helicopters and shouting. I saw it engulfed in flames.

“People have been bringing water, clothes, anything they’ve got to help, out to the cordon.

“I have seen people coming out in their bedclothes – it’s just very distressing.”

A panicked parent was seen throwing her children from a window in the block shortly after 2am, one witness said.

Joe Walsh, 58, said: “I saw the parent throw two kids out of the window.

“I don’t know where they landed because I was on the other side.

“I doubt anyone caught them, I hope they did.

“It wasn’t that high up – it would have been the fifth or sixth floor up. There were still people screaming at quarter to four this morning.”

He said he saw people drop from around the 15th floor but it was hard to tell in the darkness of the early hours.

He said: “I saw about three children between the ages of four and eight being thrown.”

He said he thought they were being sent down to firefighters because they were not letting the civilians who were there get close.

The screams of the residents had alerted him to the fire.

He said: “I could hear the screaming.

“From where I was it sounded like people were directly outside.

“It was loud. It was terrible.”

Ann Waters lives in a house at the foot of the tower and was forced to flee her home when burning debris began raining down.

The 57-year-old said: “It was the screaming that was the worst and I could hear that from the ground, all I could hear was ‘Help, help, help’.

“I was watching TV in bed and I could smell smoke and then I heard a fire engine and I jumped up.

“I went to my back bedroom, I thought if something was on fire I would see, and I was just speechless. The guy next door was screaming at people to get out of the building.

Mahad Egal escaped from his flat on the fourth floor with his family, including two small children, just before 1am.

He was reduced to tears as he recounted the terrible events of the night on the Victoria Derbyshire show: “The fire started on the fourth floor, my neighbour told me it was his fridge that exploded.

“We were one of the first 10 families who got out no later then 1.10am and at this point the fire was no higher than an average tree.

Paul Mennacer, who lived on the seventh floor of Grenfell Tower, said: “I got woken up by people screaming, saying ‘Don’t jump’. There was black smoke coming at me and my instinct told me ‘Just grab your shoes and run out’.

“It was hard to get out because the fire exit stairwell was on the side of the fire and so there was a lot of debris falling.

Fire crews from north Kensington, Kensington, Hammersmith and Paddington and surrounding stations were at the scene with the fire burning from the second to the top floor.

The cause of the fire is not known at this stage, London Fire Brigade said.

Fabio Bebber wrote on Twitter: “More screams for help as the fire spreads to another side of the building.

“We can see how quick the fire spreads via the external panels. It’s unbearable hearing someone screaming for their lives at #grenfelltower.”

George Clarke, who presents the Channel 4 TV show Amazing Spaces, told Radio 5 Live: “I was in bed and heard ‘beep, beep, beep’ and thought, ‘I’ll get up and run downstairs as quickly as I could’.

“I thought it might be a car alarm outside and saw the glow through the windows.

“It’s so heartbreaking, I’ve seen someone flashing their torches at the top level and they obviously can’t get out.

“The guys are doing an incredible job to try and get people out that building, but it’s truly awful.”

Police have released advice for anyone who has concerns in the wake of the fire: 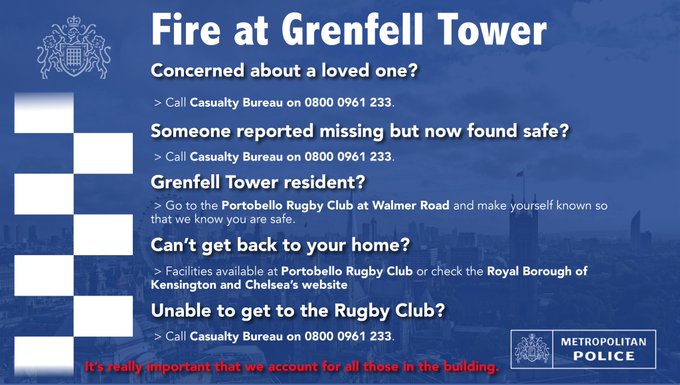 The head of London’s fire service, Dany Cotton said she has not seen a comparable fire in her 29 years of service and said crews were faced with a very challenging situation.

Transport for London said there was no service between Hammersmith and Edgware Road on the Circle and Hammersmith and City lines, while the police said the A40 was closed in both directions, owing to the fire.

London Fire Brigade said around 30 flats near the scene had been evacuated and a cordon was in place.

Extract from the IRish independant online